Rick Perry IS good for business! Credo Mobile, the ‘only’ progressive phone company in USA uses him to sell its phones AND bash AT&T

My emailbox is always full of interesting stuff.

Today I got a marketing piece from CREDO Mobile, America’s only progressive phone company.

Below is the introduction from the email marketing piece that I got today. CREDO Mobile certainly is putting Rick Perry to work creating business for their product line and services. 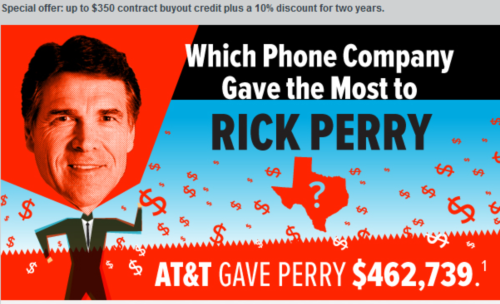 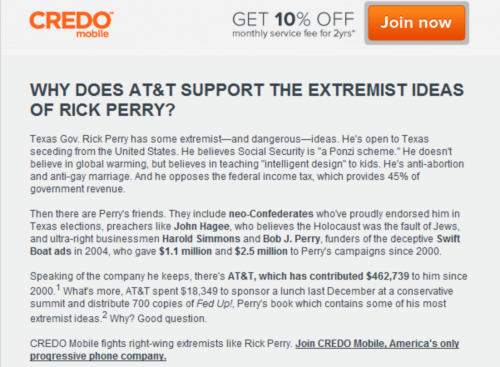 As E. J. Donne sees the Democratic challenge, which he has no problem identifying as the Left:

“On the one hand, independent voters are turning on them. Democratic House candidates enjoyed a 51 percent to 43 percent advantage over Republicans in 2008. This time, the polls show independents tilting Republican by substantial margins.”

“But Democrats are also suffering from a lack of enthusiasm among their own supporters. Poll after poll has shown that while Republicans are eager to cast ballots, many Democrats seem inclined to sit out this election.”

“The dilemma is that arguments that might motivate partisans could further alienate the less-ideological independents. The classic formulation holds that the party can either move left to excite its base or move to the center to win back independents.”

As I see it:  The Left are cats and the Right are dogs.

Cats refuse to cooperate unless they feel like it. They have no sense of common bonding, and they are nice to you only when they want something. Disagreements happen. Kick a cat and it will leave the room or scratch you … maybe never to come back. They don’t handle rough treatment well. When bored they create mischief among themselves.

Dogs crave togetherness. They easily follow a pack leader. Bonding is what they do — just because you are another dog or seem friendly to dogs. Kick a dog and he may growl and bite but it will remain with the pack. Abuse happens … but dogs have short memories. Dogs know that disagreement can sometimes be rough. They react accordingly but do not run away.

The Left are cats. The Right are dogs.

The Left seldom rallies around an idea, only issues. The Right may be dogmatic but some central core tenets of belief unite. A few choice words are enough to equate to the secret hand shake that calls forth unity.

The Left unites only for a cause celebre and then drifts away. There are no tenets of faith or belief on the Left — loyalty is to self and not to group.

The energized few can overwhelm the disengaged majority. Like them or not, the Tea Party has focused on staying energized and on building a sense of community.

As an independent I see little to like on either side at the moment. But most definitely I see absolutely no change that I can believe in.

The Democrat’s core challenge: I can vote blind for a Republican and I feel 80% assured that I know what the candidate will do once elected. A dog is a dog. The Democrats represent no core philosophy. I would never pull the lever for a Democrat ‘just because’. Future demographics are working against the mostly aged and caucasian Republican party. Yet the Democrats cannot seem to master even a simple message that they themselves believe in — that is the real challenge of Election 2010 for the Left, aka the Democrats.

Tea Party Events Being Sabotaged By Outside Group? Maybe So!

NOT GOOD – It appears that there is a group of individuals that are out to misbehave at Tea Party events so the Tea Partyers get the credit — in a manner of speaking.

If the Tea Partyers are so wrong that they naturally trip themselves up then why would they need an outside group to impersonate them and to cause problems?

Wrong is wrong. This is very wrong and calls into question much of the recent reported misbehavior on the part of Tea Partyers — especially since we know that some of the most significant misbehavior reported during the March 20th and 21st health care bill vote did not actually happen as reported by the press.

The group causing mischief is CrashTheTeaParty.org.

WHO WE ARE: A nationwide network of Democrats, Republicans, and Independents who are all sick and tired of that loose affiliation of racists, homophobes, and morons; who constitute the fake grass-roots movement which calls itself “The Tea Party.”

WHAT WE WANT: To dismantle and demolish the Tea Party by any non-violent means necessary.

HOW WE WILL SUCCEED: By infiltrating the Tea party itself! In an effort to propagate their pre-existing propensity for paranoia and suspicion…We have already sat quietly in their meetings, and observed their rallies.

Whenever possible, we will act on behalf of the Tea Party in ways which exaggerate their least appealing qualities (misspelled protest signs, wild claims in TV interviews, etc.) to further distance them from mainstream America and damage the public’s opinion of them. We will also use the inside information that we have gained in order to disrupt and derail their plans.

So is the idiot that disagrees with you a Right Winger? A Leftist, Marxist quiche eater?

What happened to just being plain about it?

Why not just say: ‘He’s a wuss that refuses to take the same position as me.’

Be a man about it. Just admit that the other guy is a moron because he doesn’t want to do it your way.

We Americans are just so into ‘us and them’. ‘Them’ is always the bad guy, and never right.

Left-wing and Right-wingers often sound like liberals and conservatives. The difference is that the wingers are not afraid to trample truth in order to achieve their political goals. “Propaganda” looks like gospel compared to what these folks put out. Propaganda is the truth with a little but important lie stuck in there somewhere. It is political spin. The facts and the tales that come out of the mouths of wingers are usually much closer to a big fat lie than it is to being good quality propaganda. Wingers have logic and veracity issues cloaked as liberalism or confused with being conservative.

Liberals and Conservatives both have principles and represent what is best in America. They just disagree. And while they may see truth differently, they both try to put America first. America is not a victim when these two meet — preferably over a beer or some other wholesome American pasttime. America is blessed because at the end of the day we all, liberal and conservative alike, are challenged in our views and there is wisdom and answers from both — with compromise usually encouraged upon us by moderates and progressives.

Centrists and Moderates are absolutely the finest blending of red, white and blue. These are perhaps the most practical of all Americans — their focus is on consideration of the facts and selecting the best solutions. Unlike liberals and conservatives they seldom have the hurdle of needing to get past their pride before getting on to finding an answer. Moderates seldom lead the way forward, however — which is hard to do when you are standing in the middle of America’s political intersection with heavy traffic coming and going both ways — calculating: the probability of the blue car hitting me is .04% less than that big truck coming … so I’ll … oops, need to recalculate. God bless them and protect them.

Progressives share many of the same challenges that centrists and moderates do, except they’ve figured out how to run like hell across the street when they see the lights change. Progressives are proactive, and made up of liberals, moderates and conservatives. Progressives live in the land of ‘why not?!’ … and are usually at the forefront of coalition building. Progressives often lead from both the left and the right at the very same time — because they are goal focused, yet take into consideration the bigger picture of not just tomorrow but the day after, too.

Warning: Progressives tend to be American independents. Don’t include them in your little party unless you are prepared for the occasional food fight. “I don’t think so” and “you are full of … stuffing” are two of their favorite phrases. Blend in some moderates that believe they are being taken advantage of and your party will be a real party.

I know that my definitions won’t suit everyone. But if you hear or read me using a political label then … please see above.

Glenn Beck makes many valid points when he discusses issues of the day. He also has a habit of sometimes just drifting into alternate universes … and who knows what he is really thinking when he drifts off.

This is Jon Stewart’s channeling of Beck’s recent musings on how evil progressives are behind everything. 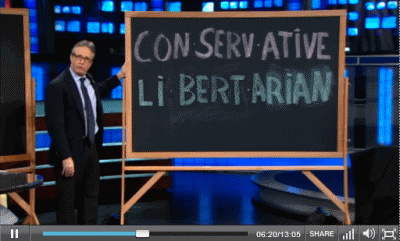 The Progressive Change Campaign Committee (PCCC) at BoldProgressives.org has decided to target Democrats running for reelection for not supporting PCCC’s endorsed vision or version of federally-controlled health care.

From the PCCC website:  “The below Democrats voted to kill health care reform in Congress. We can no longer elect people just because they have a ‘D’ next to their name. The PCCC is dedicated to electing bold progressives to Congress in 2010. Sign up to join our cause.”

This should be a cause of celebration for Republicans who are busy chasing people out of their own party because they fail to properly vote the party line. With enough shooting of self in the foot then this will create more opportunities for independents to find a place on the ballots and for real change to happen in America.