When it comes to the Fiscal Cliff, we all have much to lose.

The CBO projects that going over the cliff means that the economy takes a nosedive during 2Q 2013 and unemployment will easily break 9% by early 3Q 2013.

Should we go down the Fiscal Cliff path then 2013 will be a year of random misery as different parts of the economy adjust to magical movement of money, or lack thereof, in the marketplace. Ours is a marketplace addicted to subsidized money on both the left and the right, whether it be cheap credit cards, zero percent loans to large banks, defense spending or social spending, grants, shared underwriting of public programs or tax credits and deductibles for private investments.

Negotiation on avoiding the Fiscal Cliff will go all the way to the 11th hour … and perhaps no deal will come about. More probable than just being possible at the moment.

President Obama has a strong hand for shooting down many aspects of what the GOP wants, although the GOP does not have any actual plan that is supported both within the House and the Senate as of yet. So criticism that Obama has rejected the GOP plan are largely empty words — there is no GOP plan that the GOP itself has endorsed that can provide a guaranteed 51%+ supportive vote in either the House or in the Senate.

And yet President Obama’s challenge is that he needs a deal that the GOP House will approve, and so far there is no real Democratic plan on the table that can provide a guaranteed 51%+ supportive vote in either the House or in the Senate.

The only two people that have a written plan are Simpson-and-Bowles … and neither the Dems nor the Reps are embracing it.

Today’s Risk Level of going over the edge: Condition Red

Filed under US of America

Bogus Factoids – Veterans do have issues but …

This image from the Occupy Wall Street FB page claims that “43% of veterans are receiving food stamps”.

Whatever the intent of the message designer, this is just not true, nor anywhere close to being true.

>> Unemployment among veterans of all generations is just 7.8% — BETTER than the general population.

>> Unemployment among young veterans (<26 years old) is now 9.5% although it had hit a high of almost 30% not so long ago. Yet even at its worst the impact on veterans was not even half of what this bogus chart depicts.

Tracking veterans and their issues:

>> The Bureau of Labor Statistics (BLS) tracks veterans and issues monthly reports such as this: http://tinyurl.com/yb9ht2e

Note/FYI: I added Bogus Claims to the image.

Which Political Party Knows How to Create Jobs?

Mitt Romney recently criticized President Obama saying that we should be growing jobs at the rate of 500,000 per month …

That sounds a lot like Newt Gingrich’s promise of $2.50 per gallon of gasoline if we elected him.

Since President Kennedy, private industry jobs growth has been much greater under Democratic presidents. Government growth records go to the Republicans.

Isn’t that the opposite of what we constantly hear?

While I remain a Reagan fan — his legend should be that he was a generally inspirational figure that was the right person at the right time — jobs creation under Reagan was strong but not any kind of record setter.

Jobs growth under the different presidents — although I am not sure that they all deserve credit/discredit for the jobs created — am not a political partisan:

Noting that jobs growth has slowed significantly since Clinton’s second term, what can we do to create jobs?

What can we really do?

Edward Luce is the Washington bureau chief of the Financial Times, London.

The US labor market may never fully recover, recently wrote Edward Luce, who lives in the numbers and tracks them.

So what does ‘may never fully recover’ mean? It means simply that despite any actual economic growth in dollar value there is little reason for the number of jobs to actually grow in the foreseeable future.

Due in part to the duration of the Great Recession, our economy has adjusted to function without the need to rehire those that lost jobs. Please consider that consumer spending has returned to pre-recession levels since November 2010. Yet, here we are a year later with consumer spending now greater ($9.4T) than June 2007 ($9.2T) when the recession started and  more are unemployed today than at the depth of the recession — despite supposedly improving unemployment numbers.

In perspective, 64.4% of Americans had jobs in January 2011. Six months after the 2007 recession began, 62.9% of Americans had jobs. Employment dropped but still stayed about 60% until March 2009 with 59.9% unemployed at the very depth of massive job losses. Yet more than two and a half years later in November 2011 just 58.5% of Americans have jobs DESPITE 14 months of supposed jobs  growth and continuous growth in consumer spending.

A common mantra has been that the jobs would come back when people started spending again. Hello! They’ve been spending for a year and the actual number of Americans employed has continued to drop.

Bottomline: The marketplace has achieved efficiencies in labor usage and costs that represents a trend for our future. It is a trend that may be able to decrease the need for labor well above our population growth for the next decade or more.

Edward Luce goes on to note:

“If there is an explanation as to why middle-class incomes have stagnated in the past generation, this is it: whatever jobs the US is able to create are in the least efficient sectors – the types that neither computers nor China have yet found a way of eliminating. That trend is starting to lap at the feet of more highly educated American workers. And, as the shift continues, higher-paying jobs are also increasingly at risk … What, then, can be done to revitalise the increasingly sclerotic jobs market? If the answer were simple, it would have been on everyone’s lips a long time ago. Unfortunately, there is no precedent for the challenges America faces, and thus little consensus among economists or policymakers on the best remedies. However, almost everyone agrees on how to ensure the situation does not deteriorate.”

Bill4DogCatcher.com sez: it is time to think about how to create your own job in your own community with skills and services and products that your neighbors need. It is in someways time to return to a community-centric view of the world.

Help is not on the way from either Left or Right. You must create your own job. The time is yesterday to evaluate your skillset.

Everyone wants everyone else to pay for what they themselves do not want to pay for. Yet so much is owed that it just about doesn’t matter if you or I both pay more, unless quite a bit more // the flip side is that we are mostly in this pickle because we went along with tax cuts, cheap Chinese products and all of those added benefits without a second thought — back when we had the luxury of having a second thought.

2012: 2011 continued + federal meltdown. All are to blame and it will take sacrifice by all to fix it. If you want it then it needs to be paid for. 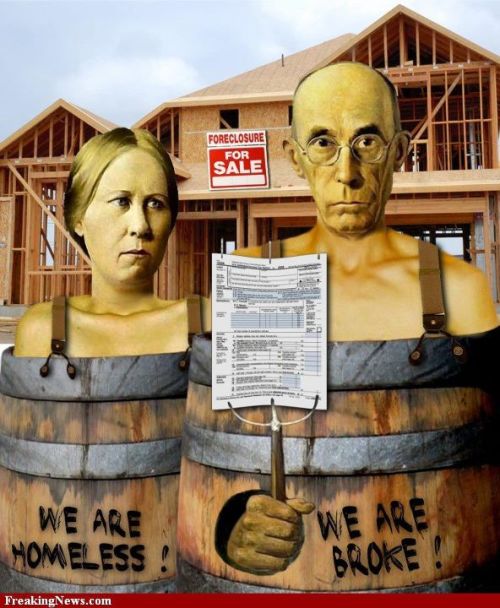 Don’t look for more in 2012. Or not enough to break through our population growth level.

The jobless numbers may get better as a percentage but that is because we are no longer counting the majority of the newly jobless from 2008-2010.

2010: 75% of those jobless got some form of unemployment assistance.

2012: The raw number of those employed seems to have plateaued. We are not losing jobs but neither are we gaining jobs. Population growth requires that at least 125-150,000 jobs be created monthly. Ain’t happening. WON’T HAPPEN. Technologic advances are not slowing and the truth is that much of what is still done by people with jobs now could be further automated and refined (i.e. humans no longer needed). It will be too.

So what to do? It will take a lot more thinking than just taxing the rich or telling the screwed: eat cake.

Pretty Colors – Do they tell a story about one major cause of unemployment?

Since 1971, unemployment downturns have ALWAYS reversed when the new housing market reversed and moved upward.

That was not true prior to 1971 but we changed many things in that year … and chances are (minus available data) that this relationship was probably true prior to 1971 as well although manufacturing played a very major role in your weekly paycheck — back when things were Made in America.

Reality Check: the Ownership Society is kaput. The middle class is broke. This trend has been in a gradual downward spiral since 1980 when real annual income growth for the lower middle class stalled. It has remained stalled ever since. Still, the middle class was healthy enough and fluid enough that it still thrived as long as there were jobs. That too stalled in the late 1990s when the percentage of eligible Americans employed began constantly and steadily decreasing every year since 1998.

The Question: Do we need to build more houses? Haven’t we really been trading up for almost 40 years … and now we need to trade down? Maybe? If so then … bad news … or can we turn the question and ask ‘what else could we build (or replace)?’.

August is always hit or miss as to whether there are more jobs than in July.

We have monthly jobs data going back to 1946; to see for yourself go to http://data.bls.gov/cgi-bin/surveymost?bls and select the first database option. Look at the numbers and you will find that the number of jobs in August drops at least 50% of the time when compared to July.

However, the real question about August jobs numbers: you wanted smaller government, yes?

There WERE private industry  jobs added in August 2011! At least 91,000 commercial sector jobs were created per the ADP Employment Report – ADP is the nation’s largest payroll company so they have a good grasp as to whether more folks are getting paychecks or not.

Math can be a tricky business and you should always demand to see the math.

You wanted smaller government. Right? The loss of jobs in August 2011 appear to be almost solely within the government sector.

Since no one ever reads the notes behind the statistics, let me point out that the Bureau of Labor Statistics (BLS) actually outlined where the job losses were causing zero jobs growth: “Government employment continued to trend down, despite the return of workers from a partial government shutdown in Minnesota.”

We have so many real problems in the world and in our country. Let’s not shoot the messenger because you got what you asked for.